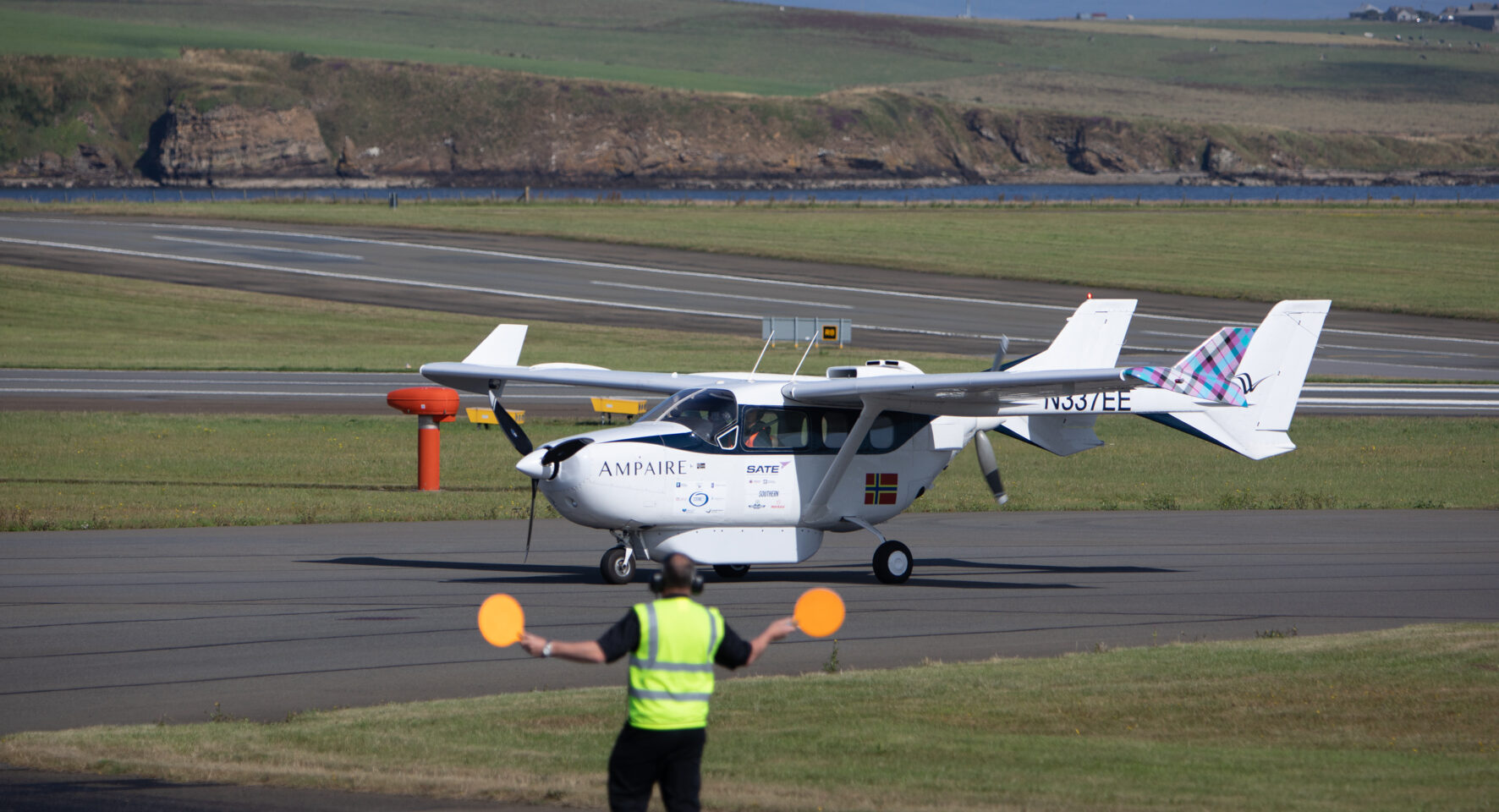 Ampaire, a leader in electric aviation, celebrates the first hybrid electric flights in Scotland today, crossing the Pentland Firth from Kirkwall Airport (KOI) on the Orkney Isles to regional airport Wick John O’Groats Airport (WIC) in the north of mainland Scotland.  This milestone marks the first set of demonstration flights in the UK.

The trials, the first to operate on a viable regional airline route, are part of the Sustainable Aviation Test Environment (SATE) project, which is being led by Highlands and Islands Airports Limited (HIAL).

Funded by UK Research and Innovation (UKRI) through the Industrial Strategy Challenge Fund, SATE is based at Kirkwall Airport in Orkney, which is also home to the UK’s first operationally based low-carbon aviation test center. SATE forms part of the UKRI’s Future Flight Challenge, created to test low-carbon aviation technologies, as well as investigate the airport infrastructure necessary to support sustainable aviation.

Ampaire’s Electric EEL technology demonstrator, a modified six-seat Cessna 337, runs on battery power and a conventional combustion engine. The company is developing a line of hybrid electric powertrain upgrades that will reduce emissions and operating costs by as much as 25 percent initially, allowing regional airlines to better serve lifeline routes in Scotland and around the world.

“Today’s flight to Wick went without a hitch, flying at 3500 feet and 120 miles per hour.   The Electric EEL is easy to fly and we’ve achieved a total five hours here so far.”

“This is an important first step to decarbonizing Scottish regional aviation, while lowering the cost of air service,” said Ampaire founder and CEO Kevin Noertker. “It’s a model for what Ampaire will be able to offer regional carriers everywhere.” The company sees its hybrid electric upgrades as a catalyst to zero-emission, all-electric aircraft, as battery technology advances and airport charging infrastructure matures.

“With CO2 emissions rising 70 percent faster than predicted,” said Noertker, “transition to zero emission technology is critical. We’re pleased to be taking a big step in that direction here in Scotland.”

Welcoming the initiative, Graeme Dey, Scottish Government Minister for Transport commented: “The Kirkwall test center and companies such as Ampaire put Scotland at the forefront of the transition to low-carbon aviation. These demo flights are an important step towards delivering our commitment to decarbonize scheduled passenger flights within Scotland by 2040.”

Susan Ying, Ampaire SVP for Global Operations commented: “We are delighted to have made history in Scotland this week with these pioneering hybrid electric flights on commercially viable lifeline routes, an important segue to scheduled, sustainable air service.”

“Hybrid-electric aircraft achieve two objectives: reducing harmful emissions and reducing cost of operations to the point that routes such as Wick-Kirkwall become viable for regional carriers. They can also make current routes more profitable while lowering fares and strengthening connectivity.”

Lorna Jack, chair of HIAL, said: “The SATE project is a very important collaboration for HIAL. Our involvement means we can support innovative projects from our partners to achieve a shared goal, decarbonize our operations and deliver environmentally sustainable aviation.  Ampaire is leading the way in delivering electric-powered aircraft that could provide a viable alternative power source for the aviation sector. It is very exciting to see this technology being tested for the first time in Scotland and we are proud that Kirkwall airport is the hub for this and future SATE projects.”

“Our aim is for HIAL to be at the forefront of Scotland’s efforts to transition to a low carbon future,” she added.

“The Future Flight Challenge is leading the development of ambitious new aviation technologies, funding projects that will make air travel greener and improving connections to rural and remote communities. We are proud to be working with Ampaire and their partners on these cutting-edge projects that will showcase how innovation can deliver tangible benefits to local communities. I’m looking forward to working with this world-class consortium as they move forward with their aircraft trials.”

With the completion of flight trials through the SATE project, the Ampaire aircraft will travel on to South West England where it will perform further demonstration flights between Exeter and Cornwall as part of the Ampaire-led 2ZERO (Towards Zero Emissions in Regional Aircraft Operations) project.